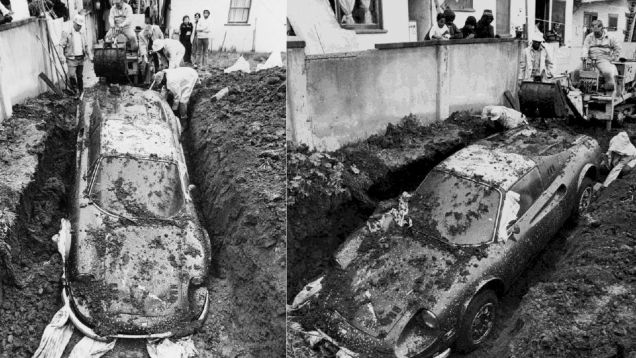 The photos above show a Dino 246 GTS. Yes, you’re looking at a Ferrari being unearthed from the front yard of a Los Angeles home. These pictures have been all over the Internet since being taken in 1978 until Mike Spinelli of Jalopnik decided to dig a little deeper. According to Spinelli’s research, the Dino had been stolen on December 7, 1974: but why buried? A source said that the Dino’s original owner had hired some guys to make it disappear. After reporting the car “missing,” the owner would collect a nice insurance check. The plan was to chop the car up then sink it, but the hired guys didn’t follow through. Instead they buried her whole. The Dino was found four years later in “surprisingly good” condition. Brad Howard has been the registered owner of the Dino ever since.

Watch the video below for more on the Dino’s post-restoration story: