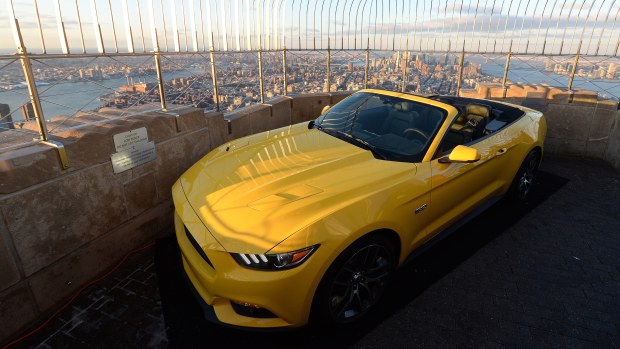 50 years ago today, the Ford Mustang made its debut. This iconic car carries a history and heritage that few other automobiles can match. Today Ford is just as passionate about their pony car as they were on day one – that calls for a celebration. For the second time, Ford has parked a Mustang on top of the Empire State Building. Yes, you read that right: the 1,224-foot skyscraper. The first time the company pulled this stunt was in 1965 to commemorate the first Mustang model and as of yesterday they’ve officially done it again. Sitting high above New York is a yellow 2015 GT 5.0 convertible. Compared to the 1965 version, the Mustang on display today is bigger, longer and wider. By the looks of this beautiful new version of the beloved model, the Ford Mustang gets better with age. Cheers to another 50 years of Ford Mustang.

Wondering how Ford pulled off the climb? Check out the video below featuring the 2015 Mustang and the team that brought it to the top (literally).

The Plymouth That Stands Out: Road Runner Superbird