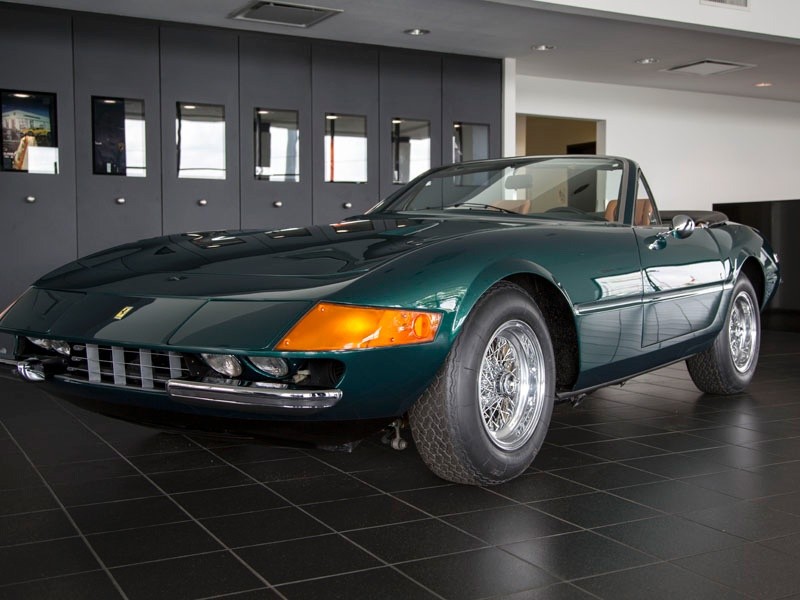 First came the Daytona, then the Daytona Spyder. It all began in 1966 when Leonardo Fioravanti was inspired to design an aerodynamic front-engine automobile. He presented the result to Enzo Ferrari who happily approved. By 1967, two prototypes were in the works using 275 GTB/4 mechanicals. The cars came to life with traditional welded oval-section tubes and 94.5-inch wheelbases. After production, the new Ferrari was complete with six downdraft Weber carburetors and a V-12 engine that displaced 4.4-liters. Four overhead cams played a part in the formal model name: Ferrari 365 GTB/4. “4” refers to the cams while “365” is the size of one cylinder in cubic centimeters. The Ferrari Daytona (AKA 365 GTB/4) debuted at the 1968 Paris Auto Show. After building a number of Daytonas, coachbuilder Sergio Scaglietti saw room for improvement. His open-air prototype called the “Daytona Spyder” soon became the popular choice. Fewer than 125 were built over three years and almost 80% went to America. Enzo Ferrari then sold his company to Fiat in June of 1969. The Spyder proved to be a solid end to the “old-school” Ferrari era.

On this episode of “Chasing Classic Cars,” Wayne transforms a 1973 Daytona Spyder from restoration red to a color that is sure to stand out at the Cavallino Classic. Enjoy.

The Maserati 3500GT: Made for the Open-Road

The First Mustang Ever Sold